Anglers Guide to Salmon Fishing by Apparel by Home Run 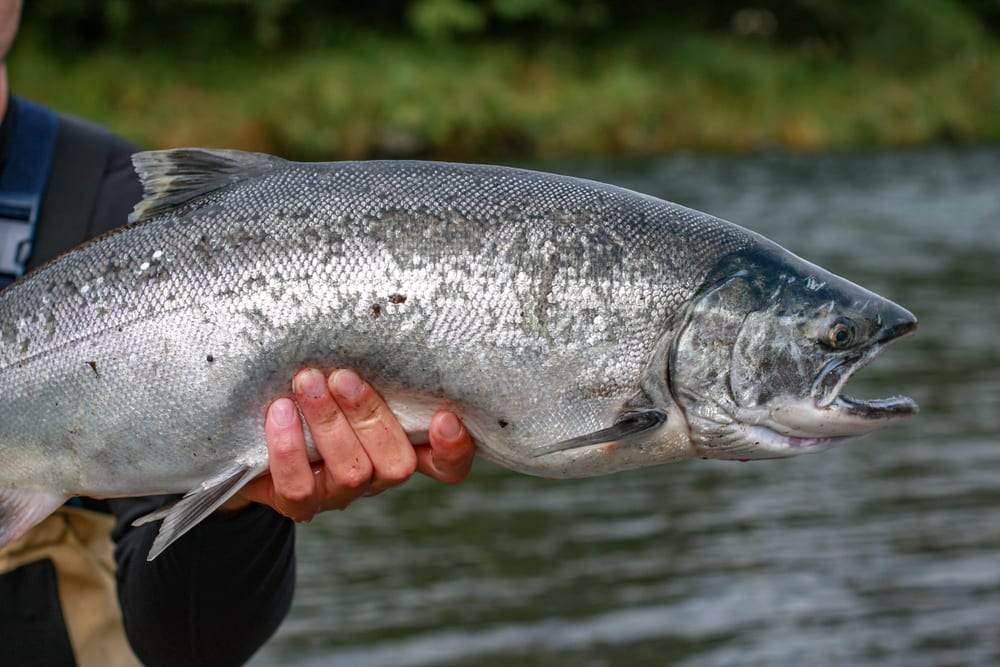 Why Fish for Salmon? What’s so special about Salmon, anyway? As the third most popular seafood consumed in the United States, Salmon holds a popular place in the hearts of many. Their vibrant color and refreshing taste have helped catapult the fish into the spotlight, but the long list of health benefits has kept peoples’ attention.

Salmon is an excellent source of protein high in antioxidants, vitamins, and – most notably – omega 3 fatty acids. These fatty acids are said to improve healthy brain and heart function and are the largest factor that led Salmon to be dubbed a “superfood.”

There are six types of Salmon in North America: These are the world’s smallest Salmon species, typically between 18 and 30 inches long. Pink Salmon have dark flecks on their light pink skin, meaning they’re aptly named! They also have a distinctive hump on their back when they spawn, which earned them the nickname “Humpback Salmon.”

You can fish for Pink Salmon in the Great Lakes region every year, but they can only be found every other year in the Pacific Northwest due to their spawning season. In contrast with Pink Salmon, Chinook Salmon are the largest Salmon species and can reach up to five feet in length! They are nicknamed “King Salmon” due to their size, taste, and price. This species has black gums and a black mouth, making them easy to identify.

If you’re eager to catch a Salmon of this size, don’t worry! Chinook Salmon are the most common species in North America and can be found throughout the Pacific Coast as well as the Great Lakes. Coho Salmon are known to be one of the toughest Salmon catches for anglers. They fight hard. Despite not being the tastiest Salmon, anglers love the challenge that these competitors pose. This species is also known as “silver salmon,” but you’ll never miss a Coho when they’re preparing to spawn as their entire body turns maroon!

You can find Coho Salmon in the Pacific Northwest, but not as far south as Chinook, which can even be fished in Southern California. Known to be the best tasting Salmon in North America, Sockeyes are loved by chefs and anglers alike. Their name says it all when it comes to identification: their large, bright eyes stand out in comparison to all other species. Like Coho Salmon, Sockeyes also turn red during spawning which creates a beautiful contrast with their green heads!

Sockeye Salmon typically reside pretty far North, starting in Washington and moving up to Alaska. In addition, these delicacies can be found in lakes throughout the U.S. and Canada. The consensus amongst anglers is that Chum Salmon are one of the worst tasting species and can sometimes be so easy to catch that they don’t pose much of a challenge. While their meat might not be delicious, Chum Salmon have the lowest fat content of any species, which might make them a healthier option! Nicknamed “Dog Salmon,” Chum are easily identifiable by their large, distinctive teeth!

You can fish for Chum Salmon all along the Pacific Coast up to Alaska, but this species has never been introduced to the Great Lakes. The only Salmon species residing in the Atlantic Ocean! While these Salmon are popular in the United States for food, commercial fishing has been banned due to overfishing that almost led the species to extinction. Atlantic Salmon have dark brown spots all over their skin, and even turn a brownish color while spawning. In fact, this species is more closely related to Brown Trout that some of the Pacific Salmon species!

While you can’t commercially fish for Atlantic Salmon anymore, they typically reside on the Northeastern coast of the U.S. up into Canada. That being said, your best chance at spotting one may be in the Great Lakes!

Okay, that’s a lot of Salmon! How can I catch them? We’ve got you covered. Here are a few popular Salmon fishing techniques to help you bring home a delicious dinner!

One of the most common fishing techniques for Salmon, trolling is a classic technique practiced by anglers. Trolling involves fishing from a moving boat and is best used in areas where Salmon are spread out, such as the Great Lakes. When trolling for Salmon, many anglers use weights or downriggers to more effectively reach their targets. For more details about Salmon trolling technique, check out this guide!

The drift fishing technique involves an angler casting their line upstream and letting it gently float with the current towards a cluster of Salmon to create a natural appearance. This technique is perfect for an area with a strong current and lots of fish, preferably concentrated together. You can get a more in-depth look at this Salmon fishing technique here!

Float fishing for Salmon is a great strategy if you’re looking for a more relaxing day of fishing. This technique involves using a floater, or bobber, to suspend your bait in the water wherever the fish are biting. It’s also a great indicator as to when you get a bite! Another benefit of float fishing is you can cast into areas of shrubbery that you may not be able to reach with other techniques! To learn more, take a look at this guide!

When fishing for Salmon anywhere from the Great Lakes to Alaska, it is important to wear protective fishing clothing. If you’re spending hours on the water in the heat, rain, or cold, the apparel you choose ultimately affects your performance. You need fishing shirts that have UV protection, moisture-wicking, anti-odor, quick-dry, and ventilated features. You should also have fishing shorts with multiple deep pockets, 4-way stretch, and stain-resistant fabrics. Skin cancer is very dangerous, and wearing 50+ UV sun protection clothing for fishing shields skin from harmful rays. 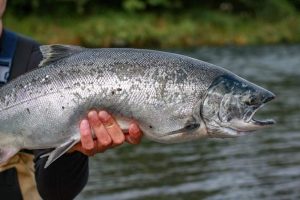