View Open
FINALLY!!! My first pike over 10kg and a new pb on

1151 77
View Open
Smoothness is all that can be said. I started fis

Beautiful brackish pike on the #Shad18twister 💥 This exact bait got me every single fish on day 2 at predatortour sweden!

Managed to improve my pr by 10grams during the last tour as well. Saw a school of perch on the Mega imaging holding up on a point were the rocks met a nice weed-line. Took a couple of well aimed casts with my Triple-S rigged Swimmin Ribster Watermelon Red flake and this well fed toad smoked it! 1720grams. Happy days!
#perchfishing #catchwithcare #bigfishtackle #megaimaging ... 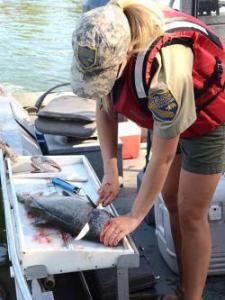 Over the next five months, survey crews will repeatedly visit 20 different sections of river to cover the full extent of the inland salmon fishery. Survey crews count the number of boats and anglers, weigh and measure each fish caught and collect the heads of those salmon embedded with a coded wire tag.

“The information the survey crews collect is vital to understanding the dynamics of the salmon fishery resource and for setting seasons in the future,” said Mike Brown, a DFG environmental scientist. “The collection of salmon heads embedded with tiny coded wire tags provides a history of how each hatchery release has fared and gives us information that can help guide salmon management in future years.”

During the 2011 Central Valley fall-run Chinook salmon sport fishery survey, crews contacted more than 4,000 fishing parties, measured 2,805 salmon and collected 652 salmon heads with coded wire tags in them. This and other baseline information were fed into a computer program that estimated the total effort and harvest of Chinook salmon in the 2011 Central Valley river sport fishery.

Those results showed approximately 60,500 salmon were caught and kept and 10,990 salmon were released for a total catch of 71,489. Seventy percent of the salmon kept were 2-year-olds, also known as “jacks.” Anglers fished on average about 14 hours to catch a salmon.

The 2012 salmon season is anticipated to be more productive than 2011.

Since 2007, 25 percent of salmon smolts released at each of the five Central Valley salmon hatcheries had their adipose fin clipped and a tiny coded wire tag inserted into the fleshy portion of their snout. Samplers check each salmon to see if its adopse fin, the small fleshy lobe on the fish’s back between the dorsal fin and the tail fin, is missing. If it is missing, the fish bears a coded wire tag.

During the survey, samplers carry large plastic bags for anglers to carry salmon after heads are removed. Upon request, the angler survey will provide the angler with a recognition letter containing information about their catch, including hatchery origin, age and release information. Although anglers on occasion do not want samplers to take the head of their catch, most voluntarily comply once the reason for the collection is explained.

Section 8226 of the Fish and Game Code states, “Anglers upon request by an authorized agent of the Department, [must] immediately relinquish the head of the salmon to the State.”

The data collected by survey crews is essential for management of the highly popular salmon fishery.

Anglers can review a summary of the Central Valley Fall-Run Sports Fishery for 2011 at: