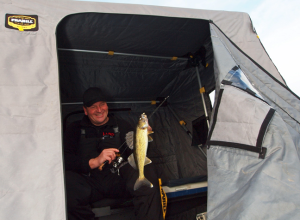 There are times when drilling just a few holes, sitting put and hoping a walleye wanders by is an okay technique. This, however, is not one of those periods.

Instead, ice anglers find themselves between those monumental moments in the hard water season, midway between early ice and midwinter. It’s a timeframe when walleyes are transitioning from feeding ferociously in the shallows to sulking in deep water.

History reveals that those who venture onto first ice find plenty of walleyes in skinny water, walleyes still found amongst the very structure they were holding in late fall. But many of those fish have left the area by now.

It’s also a well-known fact that by mid to late winter, the majority of walleyes have migrated to a lake’s main basin. Here they’re found bellied up to bottom, feeding on what little forage comes waggling their way.

So what’s the trick to catching walleyes during this transitional time of year? Do exactly what the fish are doing… Move. Not just once or twice during the day, but several times throughout the day. Although you may not take a limit of fish from one hole, chances are you will pick off fish here and there if you just get off your haunches.

Seek, and you shall find

Overall, this outdoor writer’s lazy. I usually fish for walleyes in lakes I already know the lay of the underwater land better than the back of my hand.

In the brain of my Humminbird ICE 688CI HD Combo, I already have GPS waypoints placed directly over key break lines. This lets me beeline directly to my best spots. Many of these waypoints come from finding and saving them during the open water season. I merely download the waypoints onto an SD card and then transfer them onto the portable 688. Simple, to say the least.

But what about on waterways where one rarely, or has never fished? This is where someone like Mark Brumbaugh – one of the top walleye tournament pros in the nation – rides in like a knight in shining armor. The Ohio resident travels the Midwest, fishing frozen waters as large as the Great Lakes, smaller reservoirs and natural lakes throughout the United States and Canada.

While Brumbaugh bores holes directly over break lines, he’s also looking for more subtle transformation areas on the bottom. And besides sonar, he also uses another type of electronics to do it.

“There’s no doubting that the majority of walleyes are on the move between first ice and midwinter,” says Brumbaugh. “And fish are scattered, so the best way to catch a limit is by moving often.

“Of course I am always trying to fish as close to cover, like weeds, rock, and wood as much as possible. But I also like to fish right over more subtle spots; like, were the bottom composite changes, say, where gravel butts up to clay or mud. Anywhere two different types of bottom meet, for that matter. And you can find those areas easily with an underwater camera.”

First, with sonar in hand, Brumbaugh plies the frozen surface drilling holes and checking depths. (And if he sees fish, immediately drops down a lure.) After depth is confirmed, he lowers the lens of an Aqua-Vu underwater viewing system and searches the fathoms for structure and variations in bottom composite. If neither are visible, Brumbaugh cranks up the power auger and drills another set of holes, moving until a bottom irregularity appears.

Brumbaugh fishes fast when he’s hopping hole to hole. He operates heavy lures that fall fast, not wasting any time getting into the money zone. (Getting to the bottom quickly is doubly important during a fish flurry.)

One of his go-to baits is a 5/16-ounce Custom Jigs & Spins Slender Spoon – a 1-1/2-inch jigging spoon that flips on the fall, creating a lot of flash. The walleye guru attaches the spoon to an 8-pound-test fluorocarbon leader, which is connected to 10-pound-test superline via a small ball-bearing swivel.

A medium-action graphite ice rod lets Brumbaugh feel every flutter of the spoon and faintest tic even large walleyes are known for during transitional periods.

Brumbaugh suggests not exaggerating the lift and fall of a lure, either, as too much action can and will make a walleye turn tail. Just a quick lift of the rod tip of about ten inches and a natural drop produces the intended action.

Another ploy Brumbaugh employs is tipping the spoon with a lively minnow or scented soft plastic. He suggests just nipping either in the lips so they waggle freely, adding even more action.

Looking to land more walleyes than ever when the fish are on the move? Get up off your seat and relocate frequently.

Drill holes in the ice (lots) and use modern-day electronics to pinpoint your location precisely. Lower a heavy spoon nipped with live bait or fake and set the hook at the slightest whisper of a bite.

By Mitch Eeagan
Mitch Eeagan is an outdoor writer who lives off the land in the dense cedar swamps of Michigan’s Upper Peninsula.