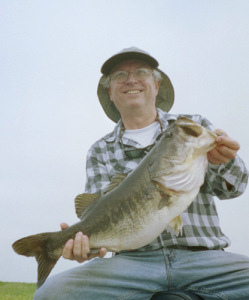 According to Ryan Ryswyk, southwest region fisheries biologist for the Wildlife Department, the stockings are not intended to increase the overall bass numbers in the lakes, but rather to introduce genetic influences.

“We know that bass populations are determined by habitat, and stocking bass will not increase population size,” Ryswyk said. “But by stocking Florida bass, we can influence the genetics of the population that already exists.”

The Wildlife Department operates its Florida bass stocking program as a way to increase the likelihood for anglers to catch big bass, since the Florida strain grows considerably larger than native strains when given good habitat and growing conditions. Normal procedure involves stocking Florida strain fingerling fish of only 1-2 inches in length into public waters on a rotating schedule. The introduced genetics influence populations and results in bigger fish. However, due to limitations of time and space, Department hatcheries cannot raise enough fingerling Florida strain largemouth bass each year to be stocked in every suitable lake.

Since these two Duncan lakes may only receive Florida strain fingerling stockings every three to five years, stocking the retired adult brooders is a viable option for influencing existing populations with Florida strain genetics.

“Stocking adult bass is not common practice or necessary in Oklahoma, but by bringing in new brood fish to the hatchery and retiring others, these two lakes now have a chance to get Florida genetics sooner than expected,” Ryswyk said. “The adult Florida bass that are stocked in these lakes will spawn with native bass, creating what are known as ‘F1s. These F1s will have the Florida genetics needed to grow to a large size as well as the native genetics to survive at cooler wintertime temperatures.”

Native largemouth bass are found in almost every reservoir in the state. Oklahoma’s state record largemouth bass, caught March 13 of this year from Cedar Lake in southeast Oklahoma, weighed over 14 pounds. Cedar Lake has a history of receiving Florida strain largemouth bass through the stocking program.