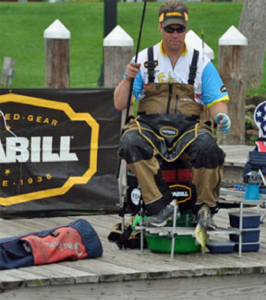 Such loveable hoodlums those Little Rascals… The dapper Alfalfa with his eternally unmanageable hair and a voice that makes angels wince; Spanky, the anchor and the leader of the gang, willing to defend his mates through thick and thin; finally, Buckwheat – again, the hair.

Well, there’s a new gang forming and they’re fixin’ to rumble on the docks at Maynard’s Restaurant on Lake Minnetonka in Excelsior, Minn. this Friday, July 27th. The strapping young lads and lasses carry monikers like “Boy Wonder”, “The Kid,” “Pup Petrie”, “Crankbait Jensen” and “The Bass Slayer.” This miniature mob, like the Marathon Man himself (aka: Jeff “Kolo” Kolodzinski) is out to claim their turf, and win. But all in the name of promoting the sport of fishing through Fishing For Life, whose charter goal is recruiting youth anglers and sharing the love of the sport.

Once again the headliner of the annual knock-down drag-out brawl will be Kolo as he takes another run at defeating himself. Yes, to knockout the Guinness World Record for the most fish caught and released in a 24-hour stint, the Marathon Man must eclipse his own tally of 2,591 biting bluegills and bass set only one summer ago.

So that’s the main event. The undercard, the 10k Kids Shootout, features those gangster Mini-Marathoners fishing against one another for an hour before Kolo takes the ring. The Marathon Man himself will be walking the docks and offering tips and encouragements from 9:00 to 10:00 a.m. while the kids battle. Then, at 11:00 a.m., Kolo takes center stage and commands the limelight for an entire revolution of the earth.

Each year, Fishing for Life’s Marathon Man event spotlights one of the organization’s touchstone programs. This time around it’s the Fish-A-Thon, a friendly month-long fishing competition that runs throughout the month of August. In 2011, Fish-A-Thon raised over $170,000; the donations invested in urban youth ministries. Besides the opportunity to simply get out and fish, Fish-A-Thon gives kids the chance to win prizes ranging from iPods to Rapala gift cards.

Fishing for Life encourages the public to mosey out onto the dock at Maynard’s and catch the Marathon Man live in action, too. And if you haven’t witnessed Kolo’s uber-European, Interpol secret-service Polish-ninja skills on the water, it is must-see TV. This boy can fish, and has done so up against some of the world’s finest in tournament match competition. If you can’t make a dash to Maynard’s, the entire 24-hour escapade will be streaming both above and below the docks – fisheye view – at www.fishingforlife.org.

Fishing for Life would like to give props to all of the Marathon Man corporate sponsors, including major sponsors Humminbird, Frabill, Rapala and the Outdoor Channel.

About Fishing for Life
Fishing for Life is a nonprofit Christian fund raising group working to support urban youth ministries in Minneapolis and St. Paul. In 2008, Fishing for Life was selected by the National Parks and Recreation Association to serve as one of 30 “ANCHOR AGENCIES” in the U.S. dedicated to promote and engage youth in the fishing and boating activities