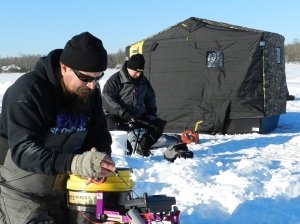 I used to think it was a cruel joke that God put so much water in Minnesota, considering it would just be frozen for a large portion of the year. And then I went ice fishing there.

Over the past few winters, I’ve traveled to Grand Rapids, Minnesota, and each trip was simply better than the last. To say this is an ice fisherman’s paradise is an understatement. Lakes abound in every direction, from small, remote ponds to openwater giants, requiring vehicles to traverse. All seem filled with fish, too.

Recently, my annual trip found me fishing on the thickest ice I have ever seen. Large power augers required extensions to reach open water but once there, the fish cooperated nicely. While I’m a sucker for yellow perch anywhere I fish, and there were plenty of hefty perch all around, the crappies were my main focus. And, once our group got the fish dialed in, I wasn’t disappointed.

Perhaps the most difficult aspect of catching crappies through the ice is initially finding them. Sure, they are most often in the main basin of the lake, but crappies often cruise shallow, and frequently suspend. In fact, I once caught crappies in deep water just off the bottom, and conversely right beneath the ice, on the same day.

On my recent trip the group immediately upped the odds, using modern Humminbird technology that’s just as effective on the ice as it is in the boat. The first few areas produced a few small fish, but a quick review of a LakeMaster map revealed a large, deep-water basin with a sharp drop-off not far away. This would prove to be the hotspot.

Just a few short years ago, it was often necessary to drill dozens of holes just to get in the ballpark. However, with today’s mapping technology, ice anglers can often start right on the money. To refer to these maps as accurate doesn’t do them justice. These maps are exact. In fact, many LakeMaster charts have 1-foot contour increments, the result of extensive surveying.

LakeMaster topo charts work seamlessly with Humminbird depthfinders; the company’s 597 unit leading the charge. Just like in the boat, this is a combo unit, featuring a liquid-crystal graph with a chartplotter / GPS unit. Everything is very portable, and the rechargeable battery lasts for several days.

Once we narrowed the search to the main basin area, anglers plied the waters with a variety of techniques, from micro-plastics to minnows. Jim Edlund, a veteran ice angler across the North Country, blazed the trail and helped me get directed.

Edlund has played the game before with finicky crappies. This year, due to tremendous snow and ice cover across much of the region, the fish have been extra temperamental. Edlund pointed out the reasoning behind this winter’s challenging bite: “Crappies are doing something biologists call suction feeding – quickly expanding the oral cavity and drawing fluid (and prey) in, rather than attacking prey. This calls for finesse – typically downsized jigs, a single spike (maggot or Eurolarva) or two, but even better, micro-plastics presented on light line (2-3-pound test) that mimic what they’re eating.”

Edlund proved his point on our trip to Grand Rapids. While others struggled and gobbed-up livebait on their hooks, Edlund found the key to be a proper looking presentation.

“I went down to three spikes, then two, then one.” he noted. “As soon as I went down to one spike I caught fish, but most would just sniff. I then decided to try modified Custom Jigs & Spins Wedgee on a Chekai jig from the same maker. I cut the plastic in half lengthwise, and then sliced the end of one of the halves down the center to create a split-tail. The resulting bait undulates wildly on the fall and waivers in the water without jigging. That latter part is really important when crappies come up to sniff.” Edlund went on to explain that, although we may not see these tiny movements of the bait, crappies do, and they key on it.

Time after time, Edlund would watch the fish rise to his offering and slowly suck the bait in. Using light line and the precision strike indicator of a St. Croix Legend Ice rod, we each were able to detect these filter-feeding strikes and land several crappies in the ten to twelve inch range. As daylight waned, the bite just got better, and our entire group, spread out over 50 yards, was catching fish. We kept enough for a group fish fry the following night at the Gosh Dam Place in Deer River. The food was life changing. Perhaps the best fried fish to ever cross my lips.

Minnesota, specifically the Grand Rapids region of Itasca County, realizes they have an ice-fishing gem, and they intend to keep it that way. Daily catch limits may be lower than some surrounding areas, but they’re more than reasonable to allow anglers a great fish dinner or two. Panfish, perch, walleyes, pike; all are here in big size and numbers. Accommodations are stellar, and many area resorts cater to ice fishermen. When I walk into a hotel, and, there on the front desk, is information about the heated fish-cleaning area and complimentary freezer space, I’ve found the right ice fishing destination.

To find yours, visit: www.visitgrandrapids.com.

Joe Balog is an avid ice fisherman from Harrison Township, Michigan, and a member of the Frabill and Humminbird pro teams.