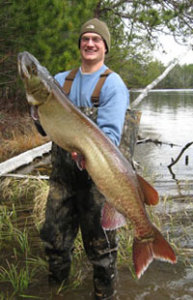 Musky fishing keeps growing in popularity in Wisconsin and fall is a good time to chase the state’s official fish because there are fewer boaters and other anglers to compete with and the fish are active, state fisheries officials say.

“We estimate that about 25 percent of anglers fish for muskellunge and that has been steadily increasing over the years,” says Tim Simonson, a fisheries biologist and co-leader of the Department of Natural Resources musky committee.

That’s about 480,000 people, and those people notch about 5.3 million angler-days fishing for muskellunge each year. They spend $425 million directly on muskellunge fishing, according to the recently published 2012 Muskellunge Management Update [PDF].

“More anglers are discovering the fun and the challenge of musky fishing,” Simonson says, a statement backed up by this year’s National Championship Musky Open in Eagle River, billed as the nation’s largest amateur event for the species.

A record number of anglers representing 15 states entered the August tournament and caught a record 198 muskies. And there were more records — more husband and wife teams than ever, and the most fish and most inches of fish caught and released by one person. Jeff Van Remortel of Minocqua won with a catch of six muskies totaling 223.25 inches, according to a press release by the event coordinator.

Simonson says the increased interest in musky fishing reflects in large part the recovery of the musky fishery in the last generation. “By all measures, the fishing just keeps getting better and there are good waters to fish in most parts of the state.”

Ninety percent of musky waters occur in northern Wisconsin, but populations of the state’s official fish are found in almost every corner of the state and anglers can even find good fishing from shore in some places.

“For those anglers who do not have boats, ample shore-fishing opportunities are present on the free flowing portions of the lower Chippewa and Eau Claire rivers in downtown Eau Claire,” says Heath Benike, DNR fisheries biologist in Eau Claire.
New online resources for 2012 aid musky anglers

The Wisconsin Muskellunge Waters book [PDF] has been updated in 2012 and can help lead anglers to the waters offering the potential to catch a monster musky or the prospect of lots of action, Simonson says.

The book lists waters where musky fisheries are found and updates the status of waters as far as whether they are Class A, the premier musky waters providing the best musky fishing, Class B, waters that provide good fishing, or Class C, waters with musky present but not of major importance to the overall fishery.

About half of the 667 classified musky lakes in Wisconsin are Class A Waters and 29 of the 100 classified river segments are Class A.

The 35-page booklet is available online and can be downloaded and printed off. Hard copy versions are available by contacting a local DNR service center and asking for a copy of publication FH 515 (2012).

The printing of the booklet was paid for by the Musky Clubs Alliance of Wisconsin, along with its individual member clubs. Funding was also provided by the Federal Aid in Sport Fish Restoration program.

A new 40-inch size limit is in effect statewide and applies to 94 percent of musky waters in Wisconsin, Simonson says. There are 41 waters that continue to have either lower size limits or higher size limits. Waters of Green Bay and Lake Michigan north of Highway 10 carry a 50-inch minimum size limit. The daily bag limit for muskellunge is 1 on all waters statewide, except Yellowstone Lake, Lafayette County (daily bag limit is 0), and Escanaba Lake, Vilas County (no daily bag limit).

The vast majority — 98 percent — of avid musky anglers reported using “quick-strike” rigs, which are designed to reduce hooking mortality, compared to using single-hook rigs, which have been shown to result in greater than 80 percent mortality in hooked muskies, Simonson says.

Effective this season, the use of single-hook rigs (other than non-offset circle hooks) are prohibited when fishing with live minnows 8 inches and larger. Single-hook rigs have been shown to result in greater than 80 percent mortality in hooked muskies. Quick strike rigs, which most avid anglers report already using, are designed to reduce hooking mortality.

There are some new temporary residents at the Wild Rose Fish Hatchery. In town from Lake St. Claire near Detroit, Michigan, 3,200 Great Lakes spotted musky are now calling the hatchery home and before long will become an important part of the successful fishery in Green Bay and the Fox River.

Their arrival is the result of a cooperative effort with Michigan DNR and Wisconsin DNR to improve the genetic diversity of our state’s Great Lakes spotted musky population. These fingerlings were raised from eggs taken from musky which were captured in Lake St. Claire this spring. When they arrived at Wild Rose they were about six inches long.

During their stay, they will be measured, fin clipped, PIT tagged and fed until they grow to about12 inches. They will spend the winter months in the outdoor ponds at the hatchery, and will then be stocked in three inland lakes come springtime.

The goal is to create a disease-free, broodstock of Great Lakes spotted muskies here in Wisconsin where eggs and milt can be collected. Then, DNR fisheries staff can rear these fish from eggs taken within the state while continuing to improve the genetic diversity. In Wisconsin, the Great Lakes spotted muskies were native to the Lake Michigan watershed before poor water quality, habitat destruction and over fishing wiped them out in the early nineteen hundreds. Since 1989, the Wisconsin DNR, along with the Musky Clubs Alliance and its member clubs, has worked to restore these fish to at least part of their native range.

The eggs collected in Michigan went through rigorous disinfections and the fingerlings underwent extensive testing at Michigan’s Wolf Lake Hatchery to reduce the possibility of diseases being brought into the Wild Rose Hatchery.

For the last three years, DNR staff has used outdoor ponds in Kewaunee to raise musky taken from feral (wild) parents out of the Fox River.
Fishing forecasts give a line on where to go

Here are some fishing forecasts from some Wisconsin fish biologists with musky waters within their assignment areas.