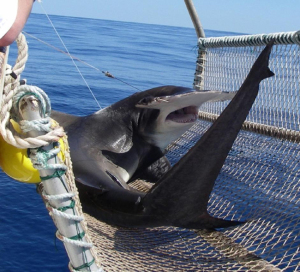 Hammerhead shark in sling. Photo taken aboard the Oregon II during bottom longline survey in Gulf of Mexico. Scientists use sling to gain better access to large sharks to efficiently measure and tag the animals.
Common Misconceptions About Shark Management and Conservation in U.S.

Are there any shark protection measures in the United States?

In addition, the United States is also a leader in promoting the adoption of conservation and management measures for sharks internationally.

Are all shark species in the United States endangered or threatened with extinction?

No.While some species of sharks are prohibited from commercial and/or recreational harvest, there are currently no shark species listed under the U.S. Endangered Species Act. For shark species whose stocks have been overfished, the United States has put in place science-based management measures to rebuild those stocks to sustainable levels. This means shark fisheries in the United States are being sustainably managed and overfished stocks are recovering.

Is shark finning legal in the United States?

No.In the United States, laws prohibit “shark finning,” a process where only the shark fins are harvested and the rest of the shark is discarded at sea. Except for one species (smoothhounds), the 2010 Shark Conservation Actrequires that all sharks in the United States be brought to shore with their fins naturally attached.

This policy allows for full use of the resource to be sold for meat and fins, enables the collection of species-specific data needed for shark management and conservation, and enhances the ability to enforce existing shark regulations.

Think you know all about sharks?
Check your knowledge here.

As one of the top predators of the oceans, sharks play an important role in the food web and help ensure balance in the ocean’s ecosystem. As demand and exploitation rates for some shark species and shark products (i.e., fins) have increased, concern has steadily grown regarding the status of many shark stocks and the insustainability in global fisheries.

Relative to other marine fish, sharks are characterized by relatively slow growth, late sexual maturity, and a small number of young per brood. These biological factors leave many species of sharks vulnerable to overfishing. Fishermen catch sharks in directed fisheries and also as bycatch in other non-directed fisheries. Many shark species have been over-exploited because their fins are highly valued for shark fin soup.

Globally there is a general lack of data reporting on the catch of sharks, particularly species-specific data. For these reasons, sharks present an array of issues and challenges for fisheries conservation and management both domestically and internationally. Despite the challenges, NOAA Fisheries is committed to achieving sustainable management of sharks.

Shark Management in the United States

For nearly two decades the United States has been a leader in managing sustainable shark fisheries and currently has some of the strongest shark management measures worldwide. NOAA Fisheries manages the commercial and recreational shark fisheries in the Atlantic Ocean and works with three regional fishery management councils to conserve and sustainably manage sharks in the Pacific Ocean. By conducting research, assessing stocks, working with U.S. fishermen, and implementing restrictions when necessary, NOAA Fisheries successfully manages shark populations to maintain productive and sustainable fisheries.

The good news is that this helps ensure that shark fisheries continue to be sustainable in the future. There are currently no shark species listed under the Endangered Species Act, and for overfished shark species stocks, NOAA Fisheries applies management measures to rebuild the stock to a sustainable level. When we sustainably manage fishermen can harvest sharks, providing benefits to both the U.S. fishing industry and seafood consumers.

Also, in the United States, laws prohibit “shark finning,” a process where industry only harvests the valuable shark fins and discards the rest of the shark at sea. Except for smoothhounds, the 2010 Shark Conservation Act requires that all sharks in the United States be brought to shore with their fins naturally attached, although individual states may have additional requirements for shark fisheries in state waters. Commercial shark fishermen can then sell both the meat and fins, which benefits their business and provides consumers with additional seafood alternatives.

Through these management measures, NOAA Fisheries and the related fishery management councils sustainably manage the shark population, which is good for fishermen, seafood consumers, and sharks.