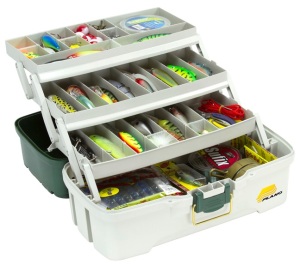 Seems like we’re constantly organizing and re-arranging baits for easier on-the-water access. We’ve got binders, bags, StowAways®, and specialty boxes that do everything but slice roast beef. And that’s all well and good.

Sometimes, though, the perfect tackle box is a rugged and reliable old school tray design—like the no-fail Plano we fished with as a kid. Rod in one hand, Plano in the other, we sneaked through fence openings, dangled the box off BMX bike handlebars, and pedaled all over creation looking for anything that’d bite, like bass spied in the shallows or ravenous small river cats.

Still today, there’s something to be said for simplicity. No need for a bait shop’s worth of different boxes when just the essentials will do—a few key crankbaits, some curly tail grubs, a spoon or two, in-line spinners, and terminal tackle like floats, weights and an assortment of hooks. Or assemble a hard box for each species that only contains go-to starter baits, no B-squad allowed.

Along those lines, Plano is proud to offer a new line of old school hard boxes in one, two and three tray configurations in bold red, blue and green metallic finishes—even a periwinkle and pink version for the girls.

Choose from three models that offer one cantilever tray with 7 to 13 compartments to three trays with 22 to 34 compartments, as well as two top access storage areas for essentials like pliers, braid cutters and bug dope. Same goes for the roomy box bottoms—there’s space in spades for line spools, rigs, sunglasses, a stringer, point and shoot camera, and the obligatory Snickers bar or a half-pint of grandpa’s wake-up juice.

And thanks to Plano’s cutting edge injection molding technology, the new family of tray boxes is stronger than ever, meaning you can drop them off boat gunnels and they’re no worse for the wear. Same goes for the all-important latch, which is made of brass to ensure no-fail operation that won’t fatigue, break or come unhinged during transport.

Whether you’ve resolved to simplify your approach, create an arsenal of species-specific essentials boxes, or simply need to outfit a next generation angler, Plano’s got you covered with rugged and reliable tackle storage options. And they’re still BMX approved.