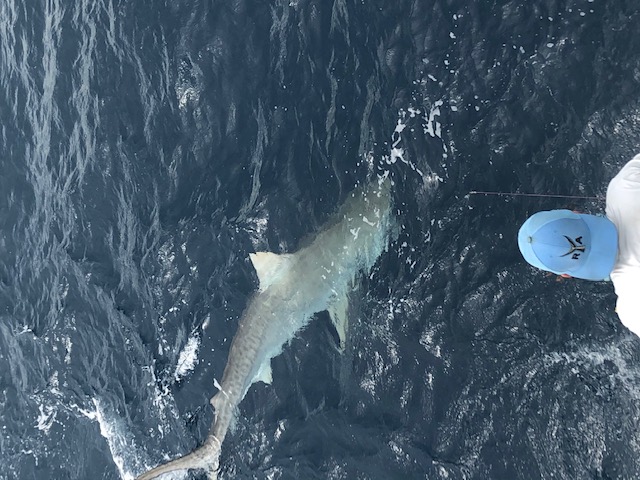 Heidi and her daughter from Colorado booked the fishing charter boat “Happy Day Today” with the Top Shot Fishing team based out of Fort Lauderdale, Florida.  She was looking to catch the biggest fish we could put her on.  Heidi is a big game guide in Colorado who hunts Elk, so we knew she could handle the job.  We had a light easterly wind with a light northern current, which makes for good Shark fishing conditions.

We headed out into the deep blue waters where the “big one’s” roam.  Fortunately, when fishing in Fort Lauderdale, we don’t have to travel too far to reach deep water.  Within 2 miles of the inlet, we were at the drop off in a few hundred feet of water where the fish migrate along the coast and pass along this ledge.  There are several different species that we catch along the drop off, and Sharks are the apex predator that dominate this path.  Quite often, we get lucky and catch other species like Grouper, Amberjack and Snapper, which is always a nice surprise.

Earlier in the day, we caught Bonitas, which we ended up using as bait.  Bonitas are fun to catch, averaging 8-10 pounds. They provide good action for young and new anglers, especially when caught on lighter tackle.  What makes them such a desirable bait is that they are extremely bloody.

We started in 300 feet of water, and with the steady wind, we were able to fly a kite.  With the bow of the boat facing into the current and off into the wind, we slowly drifted with the current and held the same depth.  Kite fishing in Fort Lauderdale is very effective and interactive for everyone on board.  The kite goes back a few hundred yards, and attached to the kite are release clips, which holds the line.  The first mate rigged a Bonita and sent it back on the farthest kite clip, and on the second clip, we had a live bait.  This makes for good action and attracts anything in the area.  Next, we sent out a middle column bait going down about 100 feet.  We used lead to get the bait down and a float to keep the bait up and away from the boat, carefully staggering the baits from shallow to deep.   Thereafter, we rigged a bait that went right to the bottom.  The mate slowly sent the bait down, not letting it tangle, and when it reached the bottom, cranked it back up 30 feet, so that it would not snag on the reef.  Now that the trap is set, we patiently wait with slight adjustments to the kite baits, as well as the Shark baits, ensuring everything is set just as it should be.   When fishing in Fort Lauderdale, things happen fast or not at all, but we do everything we can, such as cutting bait, keeping a steady chum slick.

We confidently fished for a few hours with no strikes, sightings or nervous baits.  As the clock was winding down, I was starting to get the feeling we might not be getting a shark for Heidi.  Sometime later, we all looked up at the surface bait, and clear as day, we could see this giant fish pushing water to get to the Bonita. Tail whipping and splashing, it was a Shark.  In one bite this thing ate the whole Bonita and started ripping off line.  We had over 20 pounds of drag, but it really wasn’t slowing this Shark down.  Heidi got in the fighting chair and started fighting the Shark doing a superb job gaining line when she could and keeping the line tight.  It felt like we lost more than we gained, but we steadily gained more than we were losing. I maneuvered the boat keeping up in front of the fish and angled just right for Heidi.  She battled for over an hour and 45 minutes, then this huge Tiger Shark came up.  The first mate grabbed the leader and started wiring the Tiger Shark up to the boat.  We snapped a bunch of pictures, and I got the wire cutters and carefully cut both hooks out of the Sharks mouth.  The Shark turned and swam away.

This completed our charter, and we headed back to the charter dock based in Fort Lauderdale.  For a successful and adventurous deep-sea fishing charter in Fort Lauderdale FL for Sailfish, Shark, Bonito, Mackerel, Swordfish, Snapper, Wahoo, Tuna, Mahi Mahi and Grouper, contact Captain Zsak. – 954-439-8106 or email us at captdz@gmail.com