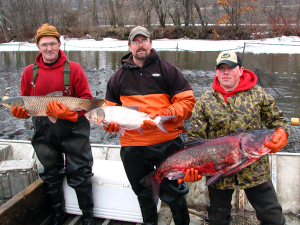 A new report commissioned by the Minnesota Department of Natural Resources (DNR) has concluded that an Asian carp barrier using sound, bubbles and lights would be the most viable option to deter invasive fish from moving past Lock and Dam #1, commonly known as the Ford Dam.

The DNR recently contracted with Barr Engineering Co. to evaluate options for an Asian carp deterrent barrier at the lock and dam on the Mississippi River. The report specifically examined what type of barrier could be used within the lock chamber, which allows commercial and recreational boats and barges to move upstream.

The chief advantage of a lock barrier is that it does not need to block fish passage across the entire river, but to deflect fish away from the smaller opening at the lock.

The goal is to prevent the fish from using the lock chamber to gain access to the upper reaches of the river, which connects to other rivers and lakes.

While an electric barrier inserted into the water would be the most effective technology for carp deterrence, the Barr report concluded it is not a feasible option due to significant public safety risks and corrosion to metal components of the lock.

The report also states that it is highly unlikely that the U.S. Army Corps of Engineers would approve an electric barrier at the lock.

A safer and less damaging alternative would involve a barrier using sound, air bubbles and lights. Together, these technologies will deter fish and pose lower risks, but may not be as effective as electricity. The sound, air bubble and light barrier would be considered experimental because such barrier has never been tested in an environment similar to a lock chamber.

The DNR’s recommendation to policymakers is that the state should proceed with the design and construction of the sound, air bubble and light deterrent barrier at Lock and Dam #1.

The estimated construction cost for such a system is $12 million, though due to uncertainties in the final design and construction, the cost could be as high as $19 million. The estimated annual operation and maintenance cost is up to $250,000.

Based on the range of cost estimates and schedule, an additional $8 million to $15 million will be needed to complete the barrier and operate it through the next biennium.

Asian carp have been found in Minnesota waters of the Mississippi River, but there is no evidence yet that they are reproducing here. The DNR is concerned about the voracious-eating fish moving upstream beyond the Twin Cities to lakes and smaller rivers.

The fish are capable of eating 5 to 20 percent of their body weight each day. Asian carp feed on algae and other microscopic organisms, often outcompeting for food with native fish. Scientists believe the fish could severely disrupt the aquatic ecosystems of Minnesota waters. In other states, Asian carp have become up to 80 percent of the fish biomass in rivers, displacing numerous other game and non-game species.