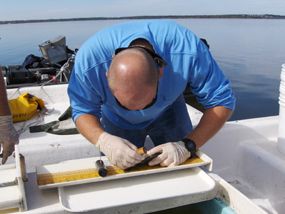 Black crappie (Pomoxis nigromaculatus) is one of the most sought-after freshwater sport fish in the U.S. Unlike black basses, which are typically caught and released, anglers harvest black crappie in large numbers with a greater focus on the dinner table. Lake Griffin, located in central Florida’s Harris Chain of Lakes, has long been a popular spot for crappie fishing. For years anglers could fill their bag limits with quality crappie, 10 inches or bigger; however, the crappie fishery in the lake has declined in the past 40 years. During its peak in 1975, angler surveys reported 370,000 harvested crappie, but that number dropped below 50,000 by 2005. In 2008 and 2009, researchers from the Fish and Wildlife Research Institute (FWRI) conducted a study to determine how management actions might improve the fishery.

Researchers conducted angler surveys in 2009 during peak crappie season to estimate the number of hours anglers spent fishing for crappie, how many crappie they caught per hour and how many fish were harvested and removed from the lake. To estimate the percentage of the crappie population removed from the lake, researchers conducted a reward-based tagging study. At the end of 2008, FWRI freshwater fisheries biologists collected crappie for tagging using haul seine nets and electrofishing. They tagged 446 crappie, with tag rewards ranging from $5 to $200, and then distributed tagged fish evenly throughout the lake. Biologists also collected carcasses from various fish camps to determine the sizes and ages of harvested crappie. Biologists used this information and data from standard trawl sampling to estimate the percentage of crappie removed by anglers and the percentage dying from natural causes.

With all this information in hand, researchers simulated the effects of three potential management strategies – no limit, 9-inch limit and 10-inch limit – on the annual crappie harvest from Lake Griffin.

Simulations produced the following best-case scenarios for the three options:

With no size limit, anglers could fill their bags, but the size of the average fish harvested would be smaller. This scenario would not be sustainable for long; the number of fish reaching preferred sizes would continue to decline. As typical catches decrease in size, the amount of time anglers spend on the lake would also decline. A simulation of the 9-inch limit produced similar results to the no-limit scenario. The 10-inch limit could result in anglers not filling their bag limits, but harvested fish would be larger. This supports more long-term sustainability by ensuring smaller fish are released back into the lake, allowing them to grow and reproduce before being harvested.

Based on these findings, FWRI biologists recommended a 10-inch limit on harvest of black crappie in Lake Griffin to improve the long-term quality of the fishery. The majority of stakeholders surveyed supported the 10-inch rule proposal. The Commissioners approved the rule change, which was implemented July 1, 2012. Biologists will continue to collect data and monitor Lake Griffin during the next five years to evaluate the effects of the 10-inch limit.

A similar study is under way on Lake Istokpoga in Highlands County, where anglers voiced the same concerns about declining crappie catches in recent years. In late 2011, researchers caught and tagged crappie and distributed them evenly throughout the lake. This study is in its early stages and researchers are still collecting data. With continued cooperation between anglers and FWC staff, studies like these can help improve Florida’s freshwater fisheries.