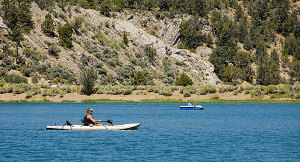 Fans of the Recreational Boating & Fishing Foundation’s (RBFF) Take Me Fishing™ campaign took to Facebook this summer to participate in Nature’s Waterpark Showdown. Each fan was invited to help determine the top eight natural “waterparks,” or state parks, for boating and fishing in America. Twenty-four pre-determined parks were put to the test and after eight weeks of voting, the fans have spoken.

The Top State Parks include:

Many families look for places that are both fun and affordable when planning vacations. Luckily for them, there are 7,804 state parks in the U.S. Additionally, 90 percent of Americans live within one hour of navigable water. As for the cost, on average the cost of fishing licenses for a family of four ($115) is under half the cost for a family season pass to the average commercial waterpark ($500).

“Families are looking for unique, affordable trips,” said Frank Peterson, RBFF President and CEO. “The Nature’s Waterpark Showdown winners are just a few examples of enjoyable fishing and boating hotspots right in your own backyard that you can visit with your family.”

Spending time with family and enjoying nature are not the only joys and benefits that fishing and boating bring. Many may not realize that the purchase of a fishing license or boat registration helps to preserve natural places, like state parks, and is vital to aquatic conservation efforts.

“A portion of all fishing tackle and license sales, as well as boat supply and registration sales, fund the conservation and preservation of our nation’s waterways helping to ensure that future generations can enjoy all that nature has to offer,” said Peterson.

Since 2007, the Take Me Fishing campaign has generated nearly $30 million for state conservation efforts. The campaign increases awareness of the need to protect, conserve and restore the nation’s aquatic resources by encouraging participation in recreational boating and fishing.

For more information on the Nature’s Waterpark Showdown winners visit the Take Me Fishing Facebook page or the Take Me Fishing Blog. The parks showcased in the campaign are just a fraction of the many outdoor recreation spots available throughout the nation. For more information on boating and fishing and a full list of places to participate in the sports, visit TakeMeFishing.org.

About RBFF
RBFF is a nonprofit organization whose mission is to increase participation in recreational angling and boating, thereby protecting and restoring the nation’s aquatic natural resources. RBFF helps people discover, share and protect the legacy of boating and fishing through national outreach programs including the Take Me Fishing™ campaign and Anglers’ Legacy™.