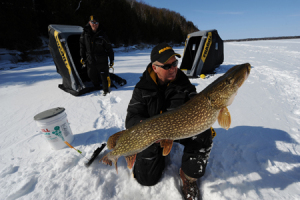 There’s something satisfying about setting a well-planed network of tip-ups across the icy expanse of a frozen lake. Strategically placed “fish-traps,” each rigged with a robust, frisky live minnow or intentionally motionless stinker like a herring to snare freshwater predators. Get a bunch of dudes together, throw a pile of Frabill Pro-Thermals in the 5-gallon pail, and saturate the ice with baited flags, as luscious to pike and walleyes as low-hanging fruit to jungle beasts.

Best to bait the big ‘uns on spacious open flats or along lengthy sections of a drop-off—places where fish wander far and wide in search of food. With six or more buddies in the group, each empowered to run 2 or more lines apiece, you can put bait in front of a lot of toothy grins. That’s trapline fishing on ice, and it’s deadly effective.

On a long point or drop-off, a wise strategy places one team of anglers at each end of the “trapline,” with additional fishermen spaced evenly between. If you’re going in cold-turkey, searching a big area for the first time, set one tip-up every 30 to 40 paces, a “scout” parked every so often to serve as eyes and ears in the field. Additionally, set out a large pop-up style portable shelter, such as Frabill’s cavernous Headquarters, midst the trapline and use it like a warming house and conference room.

Setting out on foot, groups of trapline anglers work best in pairs. First run-through, one dude drills, while the other follows with a sonar, dipping the transducer in each new hole. Sonar guy keeps driller guy on target with depth, as he also checks for fish with a portable unit, such as a ShowDown Ice Troller. When he sees something that looks like a good fish, sonar guy might also trace an “F” or “BF” (big fish) in the snow, which assures that they’ll “X-marks-the-spot” with a tip-up next run through.

At the end of an ice-trolling run, each fisherman grabs a bucket. If one of your buddies happens to be the original Ice-Troller, ace Minnesota fishing guide, Tony Roach, you’re in for a good day. From December, all through a lengthy North Country winter into last ice, Roach uses his StrikeMaster Solo to chew more ice than a snow-cone factory. “When we’re tip-up fishing for pike or walleyes,” says Roach, “we use a systematic approach. First, you’ve absolutely got to have the right gear, and you’ve got to have a plan. For my guides and I, nothing works better than the ‘bucket system.’

“There’s really nothing else out there that better serves our needs as tip-up specialists than the equipment made by Frabill. We can take one of the 6-gallon Sit-N-Fish buckets and fill it with at least six round Pro-Thermal tip-ups. The other bucket, a Frabill Aqua-Life Bait Station gets used to house our tip-up ‘soldiers’—wild live suckers, golden shiners or chubs. We demand bait that really kicks; the critters that swim in huge arcs below the ice, pulling in predators like a black lab working a field for pheasants. The Bait Station keeps minnows happy. It’s insulated and aerated. Water won’t freeze, and the micro-bubbler infuses the water with energizing oxygen—like steroids for minnows.”

Beyond vigorous bait, which drives his tip-up system, Roach has also discovered a number of slick new items that simplify yet boost the presentation. “We’ve played with loads of different types of wire leader materials over the years,” he continues. “Stranded wire, heavy fluorocarbon, single-strand— you name it, I’ve used it. None of these materials did everything I wanted it to do. After a fish or two, most of them kink. And kinked wire is useless in my book. Throw it away and start from scratch. But I hate

tying new leaders, especially if I’m in a pinch on the ice. Crimping, twisting, dealing with tiny wire sleeves. Not going to happen with cold fingers.”

Last year, Roach and crew discovered a new product called Knot2Kinky—an amazing leader material that is kink-proof, as well as tie-able and knot-able. The real kicker is that the material actually stretches, proving a valuable shock-absorber for powerful fish, such as pike and muskies. A special super-heat process has endowed the material with a 10-percent stretch coefficient—something you have to experience to fully appreciate. Knot2Kinky stretches, stops and then recovers with zero kinks or coils and no loss in tensile strength. It is undoubtedly the most advanced, fishing-friendly wire material ever developed.

“This stuff is a tip-up angler’s dream. Using a clinch knot or perfection loop, I can tie up a new leader in under a minute. Thing is, though, it’s almost impossible to get the stuff to kink, so we’ll often run the same leader on a tip-up for days, or weeks on end,” says Roach.

For most medium to heavy pike applications, Roach relies on 25-pound test Knot2Kinky, which is surprisingly thin and pliable—perfect for allowing an active baitfish to swim and maneuver without effort. It’s the same rationale behind his use of a slick new neutrally buoyant mainline to leader connector, the InvisaSwivel. Made of a material called Fluoro-Clear, these swivels are the ultimate in subtle bait rigging. They, too, are pliable. In fact, InvisaSwivels pivot 180-degrees in any direction and always spin as freely as a premium ball-bearing swivel. It’s just one more recent terminal tackle innovation that has elevated tip-up fishing to the next level.

To the end of his “trapline” rigs, Roach runs either a #1 wide gap or Kahle hook such as an Eagle Claw Lazer Sharp 141, or a Mustad Power Pike Hook, which is an English style double hook—also known as a quick-strike rig hook—that couples well with large deadbaits.

In either case, it’s always a race on ice to reach the flag first. Most of the time, especially with larger pike, it just isn’t necessary to let fish run long. Quick hooksets usually tag more pike, and certainly harm far fewer of them. In the meantime, it’s a game of waiting. Lean on a tailgate, crash in a lawn chair. Pour a cup of coffee. Talk a little smack. The winner’s always the first dude to the flag. Unless you’re playing “tackle tip-ups,” in which case, you’ve just got to be the best at sacking the QB.