View Open
FINALLY!!! My first pike over 10kg and a new pb on

Managed to improve my pr by 10grams during the last tour as well. Saw a school of perch on the Mega imaging holding up on a point were the rocks met a nice weed-line. Took a couple of well aimed casts with my Triple-S rigged Swimmin Ribster Watermelon Red flake and this well fed toad smoked it! 1720grams. Happy days!
#perchfishing #catchwithcare #bigfishtackle #megaimaging ...

Beautiful brackish pike on the #Shad18twister 💥 This exact bait got me every single fish on day 2 at predatortour sweden!

178 2
View Open
Smoothness is all that can be said. I started fis 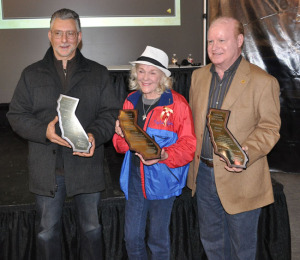 Michael L. Farrior, Rancho Santa Fe, was elected and installed into the California Outdoors Hall of Fame by a committee of his peers, the Hall of Fame Circle of Chiefs.

Farrior was cited for his volunteer work on behalf of the International Game Fish Association (IGFA) and Tuna Club of Avalon.

The California Outdoors Hall of Fame noted that “Farrior has been the catalyst in arranging Young Anglers Tournaments at fishing piers for the youth of San Diego, and the IGFA Junior Anglers Tournament at the Marlin Club. He regularly donates fishing reels to the Make A Wish Foundation drawings as well as funding fishing trips for military patients recuperating at the San Diego Naval Hospital.”

The nomination of Michael Farrior read, in part, ” . . . he is dedicated to researching and uncovering fishing history to share with anglers in California and around the world – bringing it alive for this generation and generations to come. A long-time member of the oldest fishing club still in existence, The Tuna Club of Avalon, Farrior was appointed Historian for the organization and subsequently wrote The History of the Tuna Club 1898-1998. In 2012, he was appointed IGFA’s first official Historian and will record significant catches, statistics and notable events of IGFA.

“He has shared portions of his vast antique tackle collection in a variety of venues including the Tuna Club, International Game Fish Association, boat show displays, Maritime Museums, Cultural Centers, California Historical museums, and even shipping rare Hemingway artifacts to Japan for a fundraiser benefiting the Kobe earthquake victims.”

Farrior’s scope of adventures includes 15 years in Alaska, across much of the Pacific and Atlantic oceans, and in Australia, New Zealand and nations in Africa. He is a member of the game fish association’s Hall of Fame induction committee.

Other 2013 inductees in the California Outdoors Hall of Fame were Jacqueline Douglas, a San Francisco party boat skipper since 1972 and longtime ocean conservationist; and Ed Migale, Chico, who was cited for his development of both fishing tackle and youth hunting programs.

Jacky Douglas has been California’s No. 1 goodwill advocate for salmon, fisheries, conservation and water issues during a 50-year career. She is charismatic and accomplished, one of the most popular party boat captains in America, and has taken an estimated 150,000 people from all over the world fishing out the Golden Gate. She is the first 84-years-young professional female skipper on the Pacific Coast.

She has donated her time and boat to the San Francisco Police Youth Fishing Program, Golden Gate Fishermen’s Association and KGO Leukemia Cure-A-Thon. Douglas is also an excellent naturalist; she can find describe seabirds, marine mammals and ocean anomalies to her customers.

To protect salmon and water resources, Douglas has represented the Golden Gate Fishermen’s Association at state and federal hearings and met with several members of Congress.

Douglas passed her Coast Guard examination in 1972, purchased her first party boat and managed to find a niche in a male-dominated profession. With a mastery of boating, safety and fishing, she won over the public, and in turn, her mates at the docks. Her work with newspapers, radio show hosts and TV broadcasts has brought the world of the outdoors into the homes of millions of Californians.

Ed Migale is a pioneering saltwater angler, world-traveled expert hunter and a supporter of youth hunting programs who has shared his expertise with thousands.

Migale may be best known for developing light-tackle saltwater fishing techniques, with which he helped invent and refine drift-fishing, including building new-style custom rods designed for salmon, halibut and rockfish. Thousands have attended his seminars.

Lesser known is that Migale, as a hunter, completed the “royal slam” of turkey hunting, taking all five subspecies of wild turkeys found in North America. He has hunted and fished throughout California and much of the United States, Canada and Mexico, along with Argentina and Africa.

Migale has served as a primary volunteer for conservation organizations, including the National Wild Turkey Federation, Ducks Unlimited and the California Waterfowl Association. With California Waterfowl, he was a founding member of the Youth and Education Committee. When federal law first allowed for a special “Youth Hunting Day” in 1996, Migale arranged for dozens of youngsters to hunt at his duck club.

In addition to teaching through seminars, Migale has shared his expertise on fishing, hunting and conservation in national and regional publications, and through Wilderness Unlimited.

As each person is elected into the California Outdoors Hall of Fame, they become a member of the Circle of Chiefs, who continue to inspire the next generation to adventure and service in the outdoors. If you would like to submit a nomination next year of the name of an individual with a profound scope of outdoor accomplishments who has impacted others and improved the lives of Californians, go to https://www.caloutdoorshalloffame.org/

Michael Farrior’s passion for big-game fishing and the history of that sport led him to Hall of Fame.